Home » Tips and Manuals for Beginners 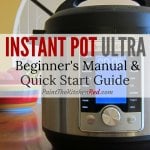 If you’ve just received your new Instant Pot Ultra multi cooker, but don’t know what to do next, this Instant Pot Ultra manual is going to help you get started.  It gives you instructions on the various parts of the Ultra 10 in 1 and also gives directions on how to complete the Water Test (Initial Test Run).

I’ve owned my Instant Pot Duo 6-Quart multi cooker for about a year.  Before that, I used a stove-top pressure cooker for many years.  Growing up in an Indian household,  the sound of the pressure cooker in the kitchen, with its hissing and steaming and loud noises, was a regular part of my day.

When my children were little , I would have to warn them when I was getting ready to use the pressure cooker and they would run out of the kitchen!  Well, times have changed.  The Instant Pot ain’t your momma’s pressure cooker.  It’s safe, easy, quiet, and can be left alone unattended.  What a change that was for me!

Even though I’ve loved my Instant Pot Duo, I was very intrigued by this new Instant Pot 10 in 1 multi-cooker.   The Instant Pot Ultra definitely lives up to its name and I love it.

I love getting comments and emails from people who find it helpful, especially because of its step-by-step instructions and photos. So I wanted to do that same type of instruction manual for the Instant Pot Ultra 60.

If you’ve just received your Instant Pot Ultra, and don’t know what to do next, you’ve come to the right place.  I’m going to give you directions on how to use this Instant Pot 10 in 1 for the first time.

This instruction guide assumes you have no prior experience with the Instant Pot.  We’ll go over the parts, important features, how to assemble the Instant Pot Ultra and we’ll do the initial test run (what is also referred to as the ‘Water Test’).

There are many new/different features on the Instant Pot Ultra but I’m not going to detail them here. For example:

I’ll give you enough directions to get you started and become comfortable making your first recipe in the Instant Pot Ultra 10-in-1.   You can read about all the features of the different models of Instant Pots at this guide I put together on which Instant Pot to buy.

If you need even more information, please visit the Instant Pot website.

Recipes for the Ultra

The only difference is how to operate the Ultra (what buttons to press, how to natural release pressure, how to quick-release pressure, etc), which you’re going to learn here. At the bottom of this article is a chart showing you some differences between the Ultra and the Duo models.

Note: All my recipes include step-by-step photos and instructions for the Ultra model.

According to the Instant Pot Safety Description, most pressure cooker disasters in the past could be attributed to user error. Instant Pot pressure multicookers are carefully designed to eliminate and avoid most of these potential problems.

PURCHASE THE ULTRA ON AMAZON!

I know that many people order the Instant Pot, and then let it sit around for months because they feel intimidated using it. If you’ve been reluctant to take the Instant Pot Ultra out of its box, know that you’re not alone.

So don’t wait another minute!  Open the box and remove the Instant Pot and its parts.  We’re going to do this together, it’ll be a breeze!

Take everything out of the box and discard the packaging. If the lid is on the base unit, open the lid by turning it counter-clockwise.

The outside of the Instant Pot lid has these features:

These parts on the inside of the lid need to be thoroughly cleaned occasionally, especially when you cook foamy foods like pasta or rice.  So it’s good to know how to remove and replace them:

The float valve needs to be cleaned periodically, especially after cooking frothy or starchy foods. I use a bottle brush to clean the float valve opening.

To remove the Float Valve:

To replace the Float Valve:

To remove the Anti-Block Shield:

Base Unit and Inner Pot

How to Release Pressure

There are a few ways you can release pressure once the Instant Pot Ultra has finished pressure cooking.  The recipe you’re following will tell you what method to use.

In this article, I discuss the two most common pressure release methods:

[Find out more details about all the different pressure release methods.]

If you still can’t resolve your problem, open a support ticket with Instant Pot.

Whatever recipe you choose to make first, I strongly recommend that you follow the recipe exactly the first few times – don’t substitute ingredients and change quantities.  Once you’re more comfortable with cooking in your Instant Pot Ultra, you can modify the recipes to suit your needs.

If you’re looking for Instant Pot Ultra recipes, my recipes are written with step by step photos of the Ultra.  Even if you don’t want to make a recipe, looking at the step-by-step photos and instructions might help you when you’re making another recipe.

Here are some of my favorite easy recipes!

Are you new to the Instant Pot and want to learn more about how it works? Here are my Top Instant Pot Tips for any new Instant Pot user. Find out about the Manual mode, leaking steam, doubling recipes, the difference between quick release and natural release, and much more.
GET RECIPE DETAILS 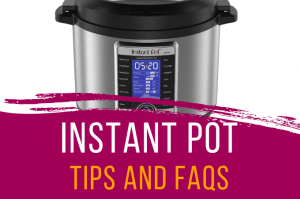 Whether it’s your Instant Pot not sealing, error codes, burn message, or leaking steam, find out how to troubleshoot common Instant Pot problems encountered by beginners and experienced users.
GET RECIPE DETAILS 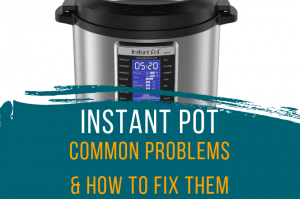 Reasons why Instant Pot is Not Sealing 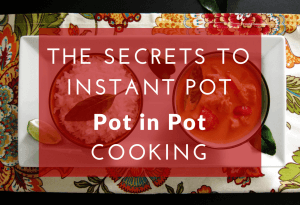