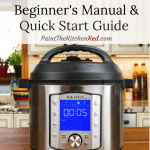 If you’ve just purchased an Instant Pot Duo Evo Plus model, this beginner’s quick start guide will help you get started.  This user manual tells you about all the parts, the most important buttons and functions, and gives you instructions on how to use the Instant Pot Evo model for the first time by doing the water test (initial test run).

Although I like all my Instant Pots, until now the Ultra was my favorite. I may have to rethink that with the purchase of the Evo. I really like it and would highly recommend it! This guide will tell you how to use the Instant Pot Duo Evo Plus right out of the box.

Make sure you also check out the companion Advanced User Guide for Instant Pot Duo Evo Plus. It gives you details on how to use the smart programs and all the buttons!

The Instant Pot has become so popular in recent years that Instant Pot is being used by some as a generic name for pressure cookers of any brand.

In reality, Instant Pot is the brand name of a multicooker that serves as a pressure cooker, slow cooker, rice cooker, yogurt maker, sauté/searing pan, steamer and warming pot all in one convenient appliance.

Some people use the name Instapot, but the correct name is Instant Pot.

The Instant Pot Company (Instant Brands) started out with one product – the Instant Pot – and now makes a wide range of kitchen appliances including air fryers, blenders, and toaster ovens.

Although the Instant Pot pressure multicooker has many different functions, the most commonly used is the Pressure Cook function. Pressure cooking allows you to cook foods at a fraction of the time it would take on the stovetop.

PURCHASE THE INSTANT POT DUO EVO PLUS ON AMAZON!

I can’t even tell you how many times I hear from people who either got the Instant Pot as a gift, or they bought it and are too scared to use it. So let me just say there’s nothing to worry about. The Instant Pot has many layers of built-in safety features!

In this guide, I’m going to (virtually) hold your hand and help you get going to the point where you’ll pressure cook your first recipe: water!

Is the Instant Pot Duo Evo Plus Safe to Use?

According to Instant Pot, in the past, most pressure cooker disasters could usually be attributed to user error. Instant Pot pressure multicookers are carefully designed to eliminate and avoid most of the potential problems.

The Instant Pot Duo Evo Plus comes with the following main parts:

The Instant Pot Duo Evo Plus comes with the following manuals and accessories:

The steam release assembly consists of:

The inside of the Instant Pot Evo lid consists of the following parts:

The anti-block shield should be cleaned periodically, especially after cooking frothy or starchy foods.

There are a few different ways to release pressure from the Instant Pot Duo Evo Plus:

1. How to do a Natural Pressure Release (NPR or NR)

USES: Rice or when you’re in a hurry and recipe calls for natural pressure release.

4. How to do a Quick Release in Short Bursts

USES: Frothy or starchy foods such as pasta, soup, oatmeal

5. How to do a Faster Natural Pressure Release with QuickCool

In theory, you’re supposed to be able to remove the QuickCool cover on the Instant Pot Duo Evo Plus and place a tray filled with ice on the metal surface to allow the pressure to be naturally released faster (up to 50% faster).

However, I’ve been unsuccessful in locating one of these trays. It’s supposed to be available in early 2020. Here’s how you would remove the cover and add the ice.

Commonly Used Functions of the Instant Pot Duo Evo Plus

The Instant Pot Duo Evo Plus has many buttons that may appear confusing and complicated. But they really aren’t. Just think of them as presets or shortcuts.

For the purposes of just getting you going, in this guide I’ll show you the most commonly used Instant Pot Duo Evo Plus buttons and functions:

[For a more detailed description of the functions and buttons, please visit my Advanced User Guide for the Instant Pot Duo Evo Plus Buttons and Smart Programs.]

The initial test run or water test serves two purposes: it familiarizes you with using your new Instant Pot Duo Evo Plus and it allows you to establish that your Instant Pot is working properly. If you have a defective unit, the water test will identify that and you can get a replacement unit.

This section tells you how to use the Instant Pot Duo Evo Plus for the first time, right out of the box. You will do a water test i.e. pressure cook water.

Pros and Cons of the Duo Evo Plus

As I’ve mentioned before, I really love this model of the Instant Pot and it’s now my favorite model. But there are a couple of things that I don’t like.

You should be all set to try out your first recipe! Here are some of my favorite easy recipes: