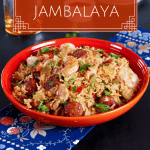 This authentic Instant Pot Jambalaya recipe was adapted from an authentic Creole Jambalaya recipe that has spicy andouille sausage, chicken, shrimp, and rice. Flavored with Louisiana spices and cooked to perfection, it’s a delicious one-pot pressure cooker meal. Great for a weeknight dinner or a special occasion!

[This post was first published in February 2017 and was one of the first Instant Pot Jambalaya recipes! It was completely updated in December 2019 with new photographs and modified instructions to help you avoid the ‘Burn’ message.]

Jambalaya is a one-pot rice dish that originated in Louisiana. There are two types of Jambalaya: Creole, which includes tomatoes, and Cajun, which is made without tomatoes.

Creole cuisine originated in the city of New Orleans and Cajun food is traditionally associated with the French Acadian people who settled the swamps of southwest Louisiana.

My Instant Pot Jambalaya recipe includes tomatoes and is derived from a cookbook I’ve had in my possession forever, but can’t recall when or where I got it!

It’s a tiny little cookbook a bit larger than a smartphone, written by chef Austin Leslie of the famed New Orleans restaurant Chez Helene, which closed in the 1990’s.

This is a one-pot meal that’s a great recipe to make for a quick weeknight meal or when you’re entertaining.  It’s perfect not just for Mardi Gras, but for any time of year.

It might seem unusual to add the raw shrimp at the end and allow it to cook in the residual heat of the jambalaya. But this is something I discovered through trial and error and find it works well and the shrimp doesn’t get overcooked or tough.

Rub Creole seasoning over the shrimp and set aside while the rice is pressure cooking, and stir in the uncooked shrimp at the end. Let it cook in residual heat with the lid on.

Try to work quickly and add the shrimp as soon as the pressure goes down. You don’t want too much heat to escape because the shrimp needs to cook in the residual heat.

When you put the lid on, you might have trouble getting it to close. Put the steam release handle/button/switch in the Vent position and it should close easily.

If you have extra-large or jumbo-sized shrimp, you’ll need to let the shrimp sit in the covered Instant Pot for an extra 3 to 5 minutes. If you have smaller shrimp you may be able to decrease the amount of time.

If you prefer, you can saute the shrimp at the beginning when you’re sauteing the sausage and chicken.

This recipe calls for regular long grain rice or basmati rice. If you’d like to use jasmine rice, pressure cook for 5 minutes.

Brown rice requires a longer pressure cooking time (approximately 22 minutes), so your meats and vegetables would probably get overcooked if you pressure cook for that long. If you’d like to cook Instant Pot Jambalaya with brown rice:

Andouille is a spicy smoked Cajun sausage. If you don’t have access to it, substitute it with Spanish chorizo or Polish kielbasa. I recommend that you use smoked sausage, not raw sausage.

The recipe calls for chicken stock but you may want to try out my Instant Pot Shrimp Stock. It adds another dimension of flavor and it’s so easy to make. You already have the shrimp shells, so why not make some stock with it?

Many people don’t like the taste of raw onions, and that’s the case with one of my children. So I often omit the shallots. The jambalaya tastes great either way.

If you’re new to the Instant Pot and aren’t familiar with how to use it, you might find it helpful to first read one of the following guides and then come back here to learn how to make this recipe. 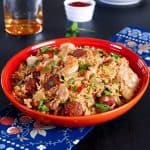 Serving: 1serving | Calories: 404kcal | Carbohydrates: 35g | Protein: 44g | Fat: 15g | Saturated Fat: 4g | Polyunsaturated Fat: 2g | Cholesterol: 192mg | Sodium: 1594mg | Fiber: 4g | Sugar: 7g
Course Main Dishes
Cuisine Cajun / Creole
Main Ingredient chicken, pork, rice, seafood
Have You Made This Recipe?I love seeing your Photos! Tag Me on Instagram @PaintTheKitchenRed or tag #paintthekitchenred.
Thank you for visiting Paint the Kitchen Red. All photos and content are copyright protected. Please don’t use any content without prior written permission. If you’ve made this recipe and would like to share it with your friends, please link back to this recipe. Thank you!

Delicious New Orleans Instant Pot Gumbo
This Delicious Instant Pot Louisiana Gumbo is a quintessential New Orleans dish that is hearty, satisfying, flavorful and perfect for a crowd.  Made with chicken, sausage and shrimp, it tastes amazing when served over rice.
DETAILS 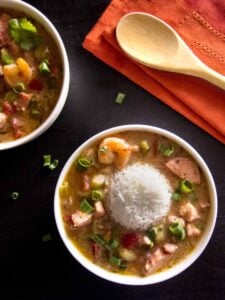 New Orleans Instant Pot Shrimp Etouffee
This Instant Pot Shrimp Étouffée is a classic New Orleans recipe made with Creole spices and plenty of shrimp in a spicy tomato-based sauce.  This rich and delicious stew tastes great over rice. This recipe is perfect for Mardi Gras but is so easy that you could make a regular weekday meal extra special. [Stovetop instructions also included.]
DETAILS 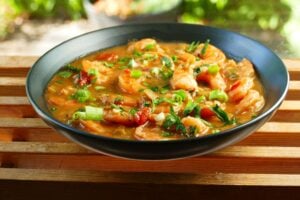 Authentic Instant Pot Red Beans and Rice
Instant Pot Red Beans and Rice is an authentic New Orleans recipe that will be very popular at your next gathering.  It tastes as though you’ve cooked it for hours, and tastes even better the next day.  Perfect for feeding a crowd, this recipe is so simple.  I’ve given instructions for using dried beans if you don’t have time to soak.
DETAILS 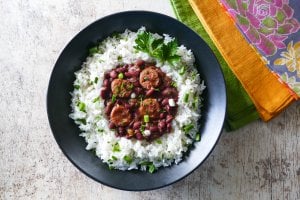 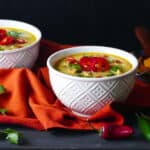