Khow Suey (khao suey) is the Burmese version of the popular Thai dish Khao Soi. This recipe is a one-pot easy version that has all the wonderful flavors of the original. A warm bowl of tender noodles and chicken cooked in creamy coconut curry broth makes this a hearty and comforting meal. It can be made in the Instant Pot or stovetop.

Khow suey or khao suey (pronounced cow sway) is an irresistible recipe with chicken and noodles in an aromatic coconut curry broth.

The recipe’s authentic Burmese name is ohn no khauk swe which means ‘coconut milk noodles’. Khow suey is very popular in India and Pakistan. It was brought to these countries by expatriates returning from Burma during the middle of the last century.

Some people complain about having to read long stories on food blogs. And I can understand the sentiment. But I hope you’ll indulge me here because I just have to share this recipe’s origins!

My Khao Suey recipe is adapted from my aunt Kumari’s family recipe. Her late husband Venu’s dad worked for a major Bollywood movie production company in Burma (now known as Myanmar) in the 1950’s.

Khow suey was one of Venu’s favorite foods when he was a boy growing up in Burma. He would buy it from street vendors outside his school at lunchtime. So his mom learned to make the dish at home.

The family fled Burma during civil unrest in the early 1960’s, leaving all their belongings behind. But the recipe for khow suey came back to India with them and eventually the recipe was passed down to the daughter-in-law, my aunt.

To this day, khow suey is one of her family’s favorite recipes. My aunt says she usually makes it on a Sunday, and it’s so hearty and filling that it’s the only meal of the day. Her recipe has quite a few steps and takes some time to prepare:

My goal was to convert my aunt’s recipe to an Instant Pot recipe, but make it a one-pot meal. I feel I succeeded in simplifying the recipe, yet preserving the delicious flavor. I also provide stovetop directions.

Just like with pho and ramen, what completes this recipe are the accompaniments and garnishes, which I’ll cover in the tips section.

As a side note, if you’re a fan of the Thai recipe called Khao Soi, you may be interested to hear that it too has its roots in Burma! According to the Wall Street Journal, Thai Chiang Mai Noodles or Khao Soi came to Chiang Mai with Chinese Muslims from Yunnan in Burma who for centuries traveled in caravans through Burma, Thailand and Laos.

There are a couple of places that you use onions in this recipe. The first is within the recipe and the second is as an optional garnish. Within the recipe, I’ve given instructions to saute the onions until they are lightly caramelized.

However, if you can take the time to saute the onions till they are a deep golden brown, you’ll get a ton more flavor. This can be time consuming and can take 15 minutes or more.

I speed up the process by setting the Saute temperature to medium high and deglazing periodically by adding a few teaspoons of broth or water to dissolve the brown bits.

You need to watch the onions closely and stir frequently if you’re using a higher Saute temperature because the onions will become bitter if they burn.

Make Ahead Tip: Sometimes I saute a large batch of onions on the weekend, refrigerate them and then use them as needed when I’m making a recipe during the week.

Kashmiri chili powder is a special kind of Indian chili powder that has a bright red color without being too spicy. I actually use more than is called for in the recipe, so if you like your curries on the spicy side, you can add more.

It can be found at Indian grocery stores or on amazon. If you can’t find Kashmiri chili powder, go ahead and substitute a smaller quantity of cayenne pepper.

The great thing about Indian dishes is that you can make them as mild as you like by adjusting the quantity of chili powder or substituting paprika for the chili powder.  The recipe, as written, is not very spicy (by my Indian standards!)

You can serve chili oil or red pepper flakes on the side, which allows each person to customize the spiciness.

I use chicken broth to cook the chicken and noodles because it adds extra flavor. If you wish to use water instead of broth, that’s fine too.

When you open the Instant Pot lid after pressure cooking, you’ll see that there’s quite a bit of liquid, but after you add the flour slurry and heat it in Saute mode, it’ll thicken up quite a bit.

My family prefers khow suey to be less liquidy. You can add a bit more coconut milk and/or broth if you’d like a more soupy consistency. Adjust the spices and sauces as needed if you’re increasing the liquid.

I really like the quality of Red Boat fish sauce which you can find at Asian grocery stores or on amazon.  But it is more expensive than other fish sauce brands.  Tiparos is another brand of fish sauce I’ve used – it’s more affordably priced.

There’s no substitute for fish sauce.  It adds that depth of flavor, the umami, to dishes.  I’ve had vegetarian readers recommend the Fysh brand of sauce.  But I haven’t tried it.  You may need to add a little extra.

Soy sauce is also a substitute for fish sauce, but there is a flavor difference.

I use full-fat coconut milk. I find some coconut milk brands don’t do well during pressure cooking, including some brands that are widely available at grocery stores. My two favorite brands are Aroy-D and Chaokoh. Some readers recommend Trader Joe’s brand coconut milk.

The traditional recipe for khow suey uses egg noodles, which do not hold up well to pressure cooking. I’ve found angel hair pasta (very thin spaghetti) to be a great substitute.

If you add the pasta altogether in one bunch, there’s a chance that the pasta will stick together after pressure cooking. By fanning the pasta out and layering in a criss-cross manner, your pasta has less of a chance of clumping.

To avoid the Burn error message, don’t stir the noodles. Just push down on it with a spatula until it’s submerged in the liquid.

The pressure cooking time may need to be adjusted if you’re using a different type of pasta. I use Barilla angel hair pasta.

When you make a slurry with the gram flour and water, make sure that there are no lumps. Stir well and if there are lumps, use a fine mesh strainer to remove the lumps by pushing the mixture through the strainer with a spoon.

Option: you can add more flavor by lightly roasting the gram flour in a frying pan and letting it cool before mixing it with water.

Note: If you make this on the stovetop, there’s no need to make a slurry. Just saute the gram flour with the spices.

How to Release Pressure When Pressure Cooking Pasta

Doing a quick release (QR) of pressure while pressure cooking pasta can result in food particles spewing out of the steam release valve. When releasing pressure, do it in bursts.

How to Serve Khow Suey (Garnishes)

Garnishes are very important to this recipe. Place each garnish in a separate bowl and allow each person to choose whichever garnish they would like to add. You can choose any of the following, or experiment and add your own take on the recipe:

If you’re new to the Instant Pot and aren’t familiar with how to use it, you might find it helpful to first read one of the following guides and then come back here to learn how to make this recipe.

* If you have the time, saute the onions till they are a deep golden brown but be careful not to let them burn. If the onion mixture browns too quickly, press Cancel until the Instant Pot cools down a bit and press the Saute button again. Deglaze as needed with a tablespoon of broth as you go.

To make this recipe on the stovetop:

See the recipe card below for detailed instructions.

Khow Suey is the Burmese version of the popular Thai recipe called Khao Soi. This recipe is a one-pot easy version that has all the wonderful flavors of the original. Tender chicken and noodles cooked in creamy coconut curry broth make this a hearty and comforting meal. It can be made in the Instant Pot or stovetop.
4.92 from 12 votes
PRINT PIN RATE
Prep Time: 15 minutes
Cook Time: 25 minutes
Total Time: 40 minutes
Servings: 6
Calories: 498
Author: Paint the Kitchen Red

Garnishes (your choice of the following)

This Easy Instant Pot Chicken Tikka Masala recipe makes a restaurant-quality Indian curry that has succulent pieces of boneless chicken in a flavorful creamy sauce.  Ginger, garlic and Indian spices combine to give the curry a heavenly aroma and taste!  [Instant Pot and Stovetop Instructions]
GET RECIPE DETAILS 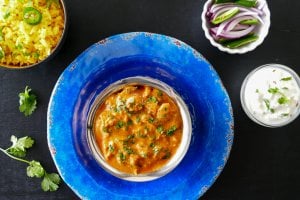 This Instant Pot Thai Panang Curry with Chicken tastes amazing!  It’s quick and easy enough to make on a weeknight and tastes like you got if from a Thai restaurant.  Creamy coconut milk, Panang curry paste, chicken, vegetables, and spices come together to make a delicious curry that tastes great with jasmine rice.
GET RECIPE DETAILS 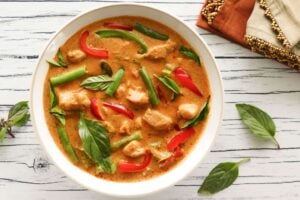