This recipe for Instant Pot Lo Mein came about quite by accident. I was actually trying to cook Chinese beef broccoli in the Instant Pot but wasn’t too thrilled with how much liquid the recipe ended up having.

So I had the bright idea to pressure cook noodles with the beef and broccoli recipe and ended up with Instant Pot Beef Lo Mein Noodles!

You might wonder why we’re using spaghetti for this recipe instead of lo mein noodles. In order to get the beef to cook perfectly and not have the noodles become mushy, I needed to find a pasta that could be pressure cooked for long enough so the beef would cook perfectly.

Learn more about your Instant Pot…

The lo mein noodles that I normally use would have been terribly overcooked, whereas the spaghetti’s cook time was approximately in the right range.

Chinese food in the Instant Pot is tricky because we’re used to Chinese dishes being stir-fried. This recipe, due to the addition of noodles is a great option when you’re in the mood for Chinese food and want something that’s an Instant Pot one-pot meal too.

Beef chuck does so well in the Instant Pot because it’s a fatty cut of beef. The cook time I recommend is 8 minutes. This is a fairly short amount of pressure cooking time for beef chuck and that’s because the recipe calls for beef that is sliced very thinly, less than 1/4 inch thick. If the beef is thicker, it might not cook to be tender enough. If you end up with tough beef, next time, you might want to cook the beef first for 3 minutes and then add the noodles.

I recommend that you trim off as much extra fat as you can. This is a bit time-consuming, so be sure to leave enough time for this.

If you want to substitute chicken, cut boneless skinless chicken thighs into bite-size pieces. Use a thinner spaghetti like angel hair pasta and cook for about 4 minutes.

My family happens to like broccoli! You can substitute any vegetable of your choice: snow peas, carrots, bell peppers, zucchini, or water chestnuts.

There are different kinds of rice wine. Chinese rice wine is called Shaoxing and Japanese rice wine is known as Mirin. It would be best if you get the Shaoxing, but it can be more expensive than the alternatives.

Mirin is sweeter than Shaoxing, so if you use it, you’ll need to reduce the honey or sugar quantity. Aji Mirin is similar to mirin but sweeter and is more readily available at grocery stores. Make sure you don’t confuse rice wine vinegar with rice wine!

If you add the spaghetti altogether in one bunch, there’s a chance that the noodles will stick together after pressure cooking. By fanning the noodles out and layering in a criss-cross manner, your noodles have less of a chance of clumping.

To avoid the ‘Burn’ error message, don’t stir the noodles. Gently push down on it with a spatula until it’s submerged in the liquid. This might take about 20 to 30 seconds. Once the noodles are wet, the lid is ready to be closed and you can begin pressure cooking.

Doing a quick release (QR) of pressure when cooking pasta can result in food particles spewing out of the steam release valve. When releasing pressure, do it in bursts.

Depending on the quantity of liquid that’s released from the meat and vegetables, it’s possible you might have some extra liquid in the inner pot after pressure cooking is complete. If you do, let the noodles rest for a few minutes and they should thicken up. If there’s still some liquid, turn on Saute mode and allow the liquid to evaporate.

Saute Beef and Remove from Heat

TIP: To prevent overcrowding, saute the beef in batches if necessary.

Saute Vegetables and Remove from Heat 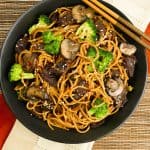 Other Recipes for you to Try

Instant Pot Thai Peanut noodles is my take on a Thai restaurant favorite. In this flavorful dish, plain spaghetti is elevated to a different level with a vibrant peanut sauce. Rice wine vinegar, brown sugar, and chili garlic sauce give the dish its distinct tangy, sweet, spicy flavor.  This dish can be made vegetarian by omitting the chicken and substituting fish sauce with soy sauce.
GET RECIPE DETAILS 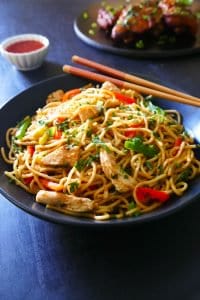 Instant Pot Shrimp Pasta with Garlic is an easy one-pot meal that is perfect for a quick dinner idea. The angel hair pasta, shrimp, garlic and all the ingredients are cooked in the Instant Pot together. Make the recipe spicy by adding some extra crushed red pepper! 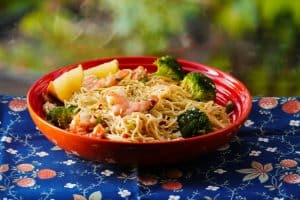 If you're looking for that last-minute accompaniment to complete your dinner menu and you don't have a lot of time, this Instant Pot Fried Rice is perfect for you.  Quick and easy, the recipe calls for frozen vegetables, Jasmine rice, and ingredients you probably have on hand and it requires minimal prep work.
GET RECIPE DETAILS
« Instant Pot Thai Coconut Soup | Tom Kha Gai
Healthy Instant Pot Butter Chicken with Cashew Butter »