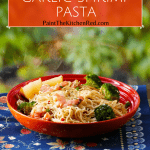 Instant Pot Shrimp Pasta with Garlic and Parmesan is an easy one-pot meal that is perfect for a quick dinner idea. The angel hair pasta, shrimp, garlic and all the ingredients are cooked in the Instant Pot together. Make the recipe spicy by adding some extra crushed red pepper!

This Instant Pot Shrimp Pasta recipe is very similar to shrimp scampi served on angel hair pasta and it’s a favorite in our house.

Y’all are probably tired of hearing me say that I’ve adapted yet another family favorite to the Instant Pot. But it’s true!

As a side note, if you happen to click on the recipe for the stovetop Garlic Shrimp Pasta, don’t judge! Although the recipe is great, I’ve come a long way in terms of photos and how I organize my recipes!

I’ve changed the recipe up a bit for the Instant Pot, but the flavor of this dish is as good as the stove-top version. Give it a try and let me know what you think in the comments below!

You might ask why you’d want to cook this recipe in the Instant Pot when you can cook it on the stove. The main reason is how easy it is to make as an Instant Pot one-pot meal, especially considering that there is no loss of flavor!

There are two things you can do to get a stronger garlic flavor. The first is to remove part or all the cooked garlic after sauteing and add it back in at the end, as suggested in the recipe. The second is to add more garlic. My recipe calls for 2 tablespoons of garlic. You can certainly add more.

If you’d like a spicy Instant Pot Shrimp Pasta, add more crushed red pepper when you’re adding the shrimp. I do this when I normally make the recipe for my family.

The recipe gives you the option of using chicken broth or water. Using broth makes the pasta more flavorful. I sometimes use seafood stock, which is very easy to make from the shrimp shells. Give it a try.

Add more flavor by deglazing the inner pot with about 2 tablespoons to 1/4 cup of white wine after sauteing the onions and garlic.

If you like a more lemony flavor, add in an extra teaspoon or two of lemon juice at the end.

If you’d like the recipe to be richer, you have a couple of options.

How to Cook Spaghetti in the Instant Pot

If you add the angel hair pasta altogether in one bunch, there’s a chance that the pasta will stick together after pressure cooking. By fanning the pasta out and layering in a criss-cross manner, your pasta has less of a chance of clumping.

To avoid the ‘Burn’ error message, don’t stir the pasta. Just push down on it with a spatula until it’s submerged in the liquid.

How to Make the Recipe Healthier

I frequently load up on the vegetables. You could add in some extra broccoli, or spinach, arugula, mushrooms, zucchini, frozen peas, etc. You could also add some roasted vegetables at the very end after the shrimp is cooked.

If you want to substitute chicken for the shrimp, use boneless skinless chicken thighs cut into bite-size pieces. Saute the chicken briefly after adding the onions and pressure cook the chicken with the pasta using the recipe’s pressure cooking time.

How to Release Pressure with Pasta

Doing a quick release (QR) of pressure when cooking pasta can result in food particles spewing out of the steam release valve. When releasing pressure, do it in bursts. 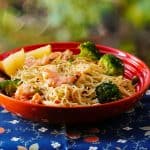 Instant Pot Shrimp Pasta with Garlic is an easy one-pot meal that is perfect for a quick dinner idea. The angel hair pasta, shrimp, garlic and all the ingredients are cooked in the Instant Pot together. Make the recipe spicy by adding some extra crushed red pepper!

Creamy Instant Pot Chipotle Shrimp Soup is a quick and easy soup recipe perfect for a busy weekday.  It’s loaded with potatoes, corn, bacon and shrimp, finished with cream and gets a spicy kick from Chipotle chilies.
GET RECIPE DETAILS

Instant Pot  Shrimp and Grits is a delightful one-pot meal. Tender shrimp and crisp bacon in a spicy tomato sauce combine with creamy grits to create a delicious fusion of flavors.
GET RECIPE DETAILS

This Instant Pot Shrimp Étouffée is a classic New Orleans recipe made with Creole spices and plenty of shrimp in a spicy tomato-based sauce.  This rich and delicious stew tastes great over rice. This recipe is perfect for Mardi Gras but is so easy that you could make a regular weekday meal extra special. [Stovetop instructions also included.]
GET RECIPE DETAILS