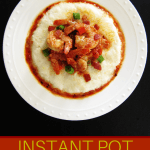 Instant Pot Shrimp and Grits is a delightful one-pot meal. Tender shrimp and crisp bacon in a spicy tomato-based sauce combine with creamy grits to create a delicious fusion of flavors. 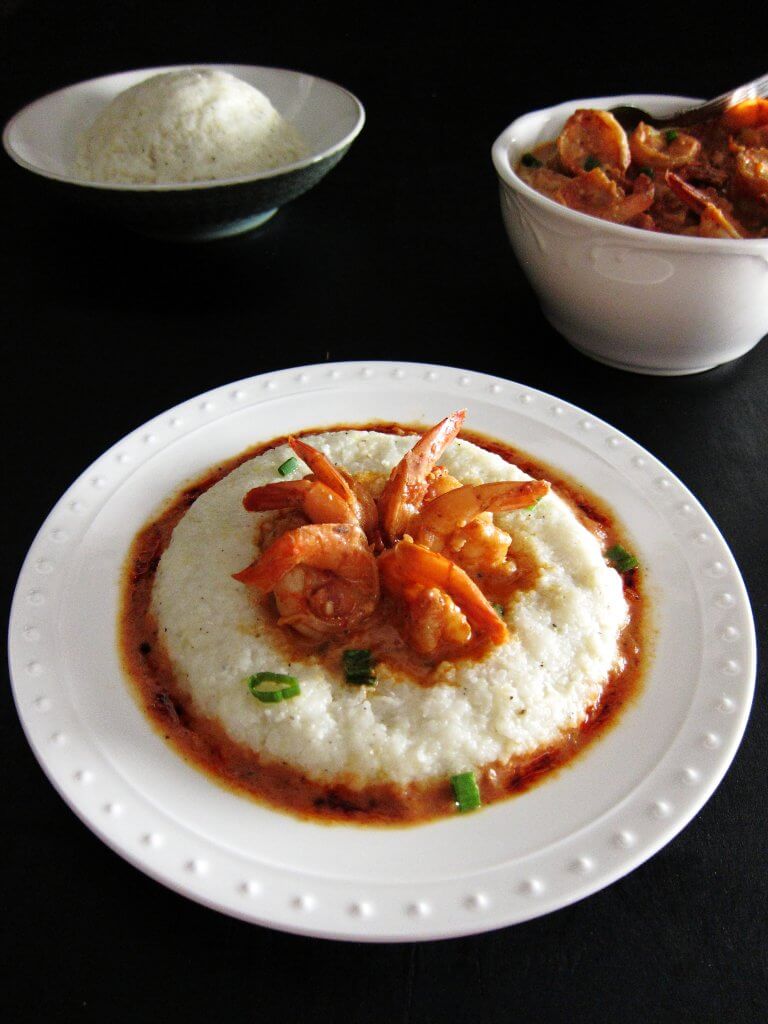 This Instant Pot Shrimp and Grits recipe is adapted from my own stove-top recipe for shrimp and grits that I’ve been making since I lived in the South.
I may have moved out west, but I still get a hankering for Southern shrimp & grits every few months!  If you’re wondering what grits are, they’re coarsely ground dried corn, similar to Italian polenta.
Originally served as a breakfast dish in the Southeastern US, shrimp and grits has gained in popularity on restaurant dinner menus. There are probably as many variations of shrimp & grits as there are restaurants serving the dish.
I’ve had shrimp and grits without tomatoes, with mushrooms, with cheese, or with andouille sausage or chorizo instead of bacon. Some versions are simple with just salt and pepper for spice and other versions use more bold flavorings.
My version is not the salt and pepper kind!  It has spice-rubbed shrimp in a rich tomato-based sauce served on a bed of creamy grits.  In adapting the recipe to the Instant Pot, I wanted to make the dish a one-pot meal with as few steps as possible.
The dish is easy to make: of the 45 minutes of cooking time, less than 10 minutes are hands-on.  The end result is a wonderfully flavorful and comforting shrimp and grits.
You’ll notice that the shrimp is not sauteed at the beginning. It’s seasoned with a dry rub of Old Bay seasoning

, added in at the end.  This seals in all the flavors.
Since the shrimp cooks in the residual heat of the Instant Pot, make sure you close the Instant Pot immediately after adding the shrimp – you don’t want to let too much heat escape!
I hope you get to try out this Instant Pot Shrimp and Grits recipe. If you’ve never tried grits, this is the way to try them because they go so well with the shrimp. It’s a meal-in-one that’s delicious and satisfying.

It’s not easy finding authentic stone-ground southern style grits where I live.  The best option I’ve found is this kind of grits.

This Instant Pot shrimp and grits recipe uses the pot-in-pot method to cook the dish.  You’ll cook the sauce ingredients directly in the inner pot, put the grits in an oven-safe bowl

that’s placed on a trivet in the sauce, and cook both together. The steam from the sauce will build pressure and cook the grits.

Depending on the quantity of grits I’m making, they can be lumpy when finished cooking.  I usually don’t have a problem if I make the recipe as written but when I double it, I need to break up the lumps with a fork once cooking has completed.

If the grits seem too liquidy when you take them out, they will thicken if you let them sit for 15 minutes or so.

I have two trivets: the one that came with the Instant Pot and a 2.7 inch trivet. The tall one was too tall to fit the glass bowl I used for the grits, so I used the former, which was a bit messy since it sat in the sauce instead of above it. After making this recipe, I purchased this 2 inch trivet

, which I feel is just the right size.

The lemon juice gives this recipe a slightly tart flavor.  If you wish, you can reduce the quantity of lemon juice.

Feel free to substitute creole or cajun seasoning for the Old Bay Seasoning.

If you’re new to the Instant Pot 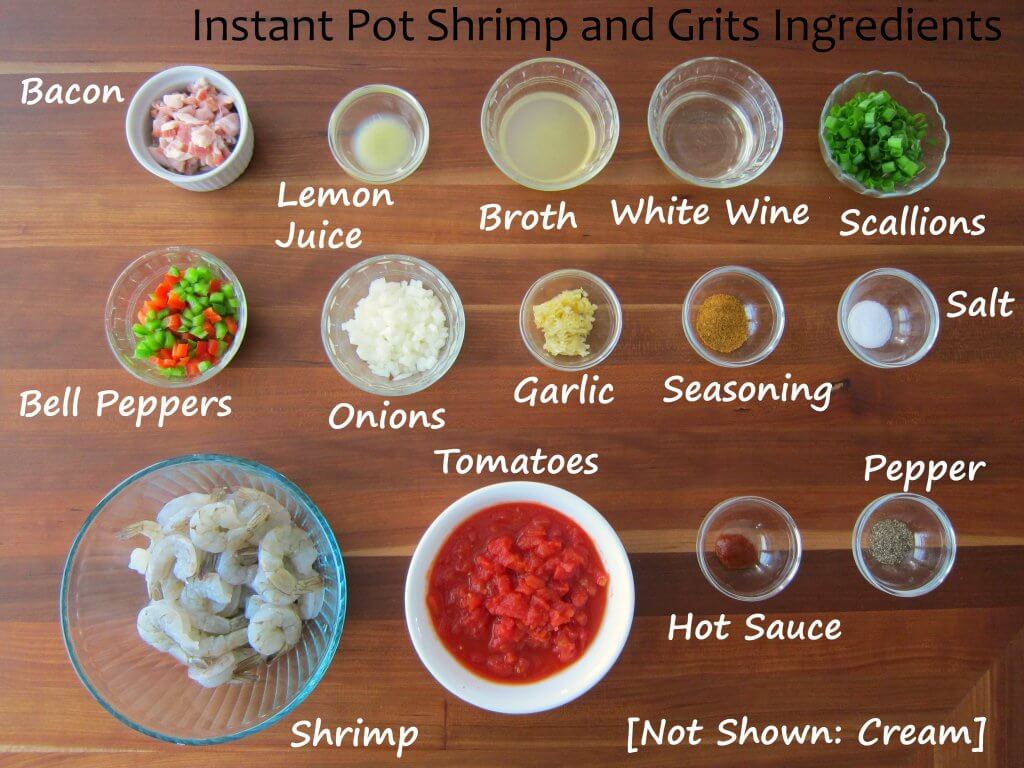 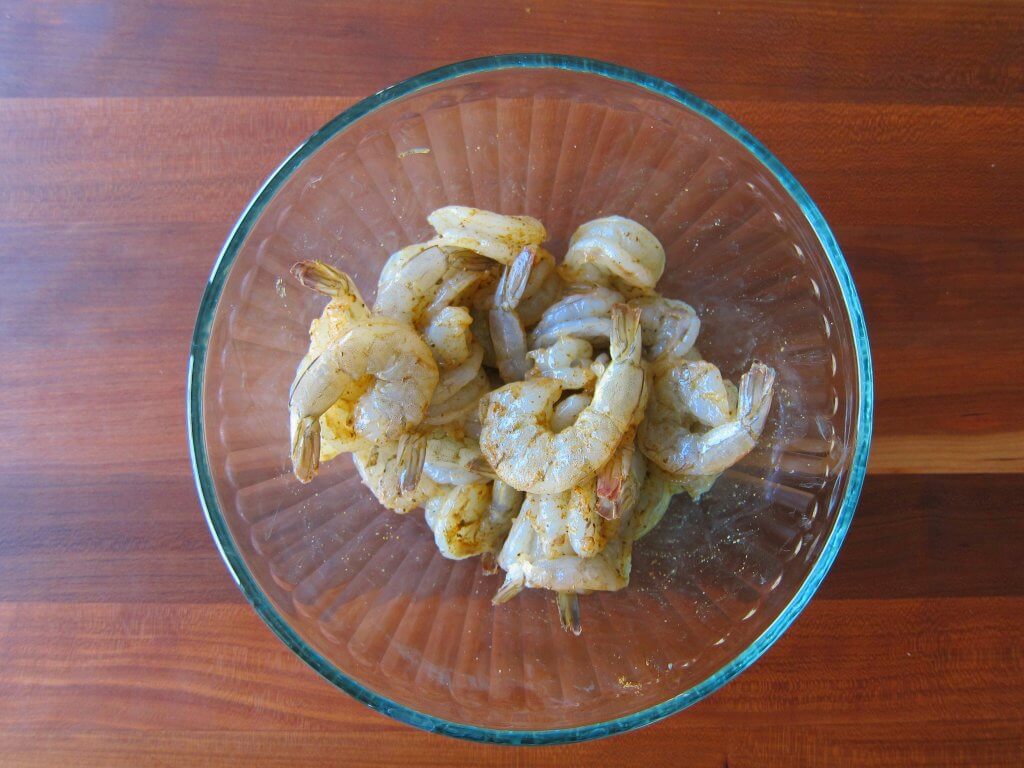 * Be sure not to let too much heat escape while you’re removing the grits.  The shrimp will be cooking in residual heat of the Instant Pot. 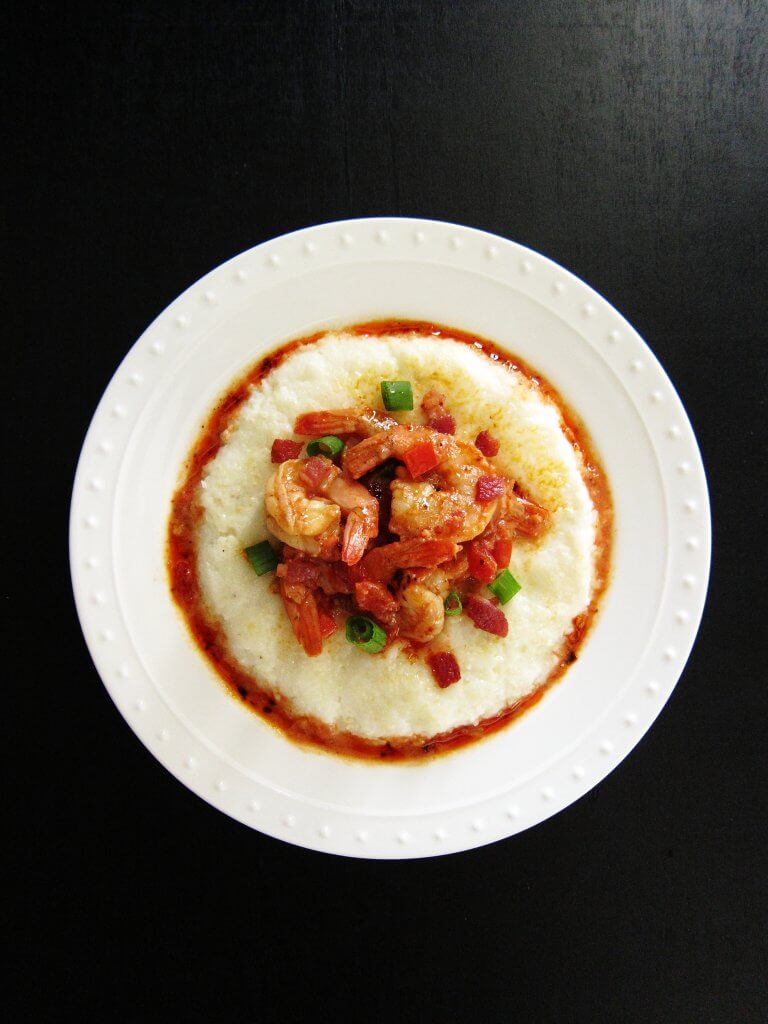 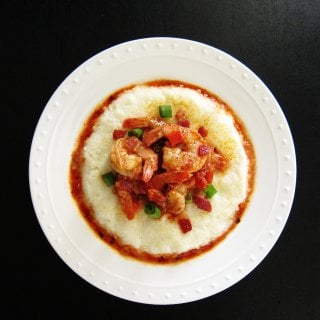 If you loved this recipe, please give it a 5 Star rating in the comment section below and please share it on social media using the social media share buttons at the top and bottom of this post. Thank you so much!