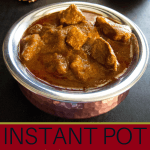 Instant Pot Vindaloo is a spicy, tangy Indian curry from the state of Goa in India. This is a homemade authentic vindaloo recipe that comes from my mother-in-law and was adapted for the Instant Pot. 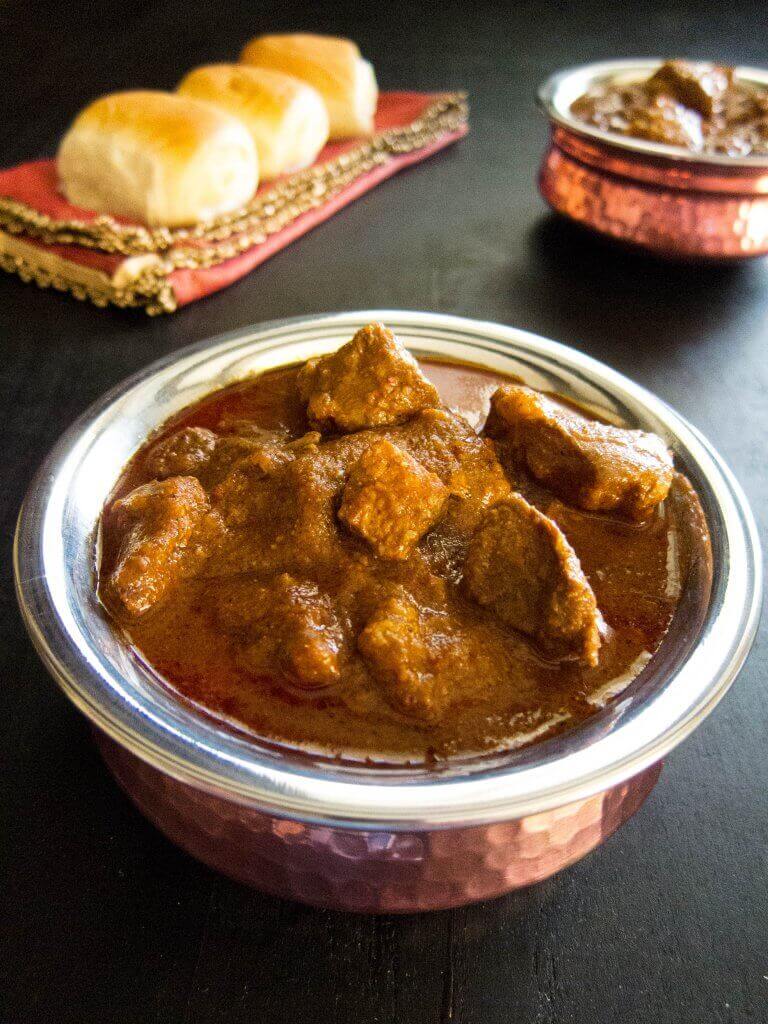 You might have tried Vindaloo at an Indian restaurant or purchased a jar of Vindaloo paste or sauce at a grocery store, but although they may have been tasty, more than likely (sorry to break it to you) they weren’t the real deal. Not even close.
Vindaloo (pronounced vin-duh-loo) is a popular dish in Indian restaurants, especially in the UK.  Vindaloo has become synonymous with ‘super hot and spicy curry’.
In restaurants, it’s usually a generic curry base, with vinegar and a whole lot of chili peppers thrown in.  Sometimes, these Vindaloo dishes are so spicy that you don’t really get to experience the nuanced flavors if there are any.

So here are a few facts about an authentic Goan Vindaloo recipe:

The ‘Go Directly to Recipe’ link below is for those of you who just want the vindaloo recipe and don’t have the time to read about the history of Vindaloo, Goa or the Portuguese influence in India. I get it, that’s okay…..
The rest of you, make yourself comfortable and read on.  It’s actually pretty interesting!  And as with every recipe, I also give you insights and tips on making the recipe successfully.

Most people know that Britain ruled India for centuries, but they may not know that Portugal has an even longer history in India. The Portuguese arrived in India in the late 15th century, around the time Columbus landed in the Americas.
The state of Goa became a Portuguese colony in the late 17th century and remained under Portuguese rule until the early 1960’s.
So, what’s the Vindaloo connection? Well, the Portuguese came to Goa with their recipes and spices. And they brought with them a dish called Carne Vinha d’alhos which means ‘Pork with Garlic Wine’.  It’s a fairly mild dish cooked similar to the adobo style of Spanish cooking.
Over time, the local Indians changed the pronunciation of the dish to ‘vindaloo’ and added their own take to the dish with the addition of ginger, black pepper, tamarind, cardamom and other Indian ingredients.
Before the Portuguese came to India, Indians had spiced their dishes with black peppers and not chili peppers. At that time, black pepper was found only in India and was prized in Europe as a luxury product imported from India.
It’s hard to believe that chili peppers, which are essential to today’s Indian cooking, were introduced to India by the Portuguese!
For the record, I did not grow up eating Vindaloo, because I’m not from Goa.  Aaah, but I married a guy who is. And he has a mom who makes one mean Vindaloo. My mother-in-law Grace, is a wonderful cook and I’m sharing her recipe with you. Thank you, Grace!
I made a few changes in adapting Grace’s recipe for you: I reduced the quantity of chili peppers from 10 to 6, and omitted the Feni since it’s almost impossible to find outside of Goa.
The end result is pretty close to the real deal. This is one of my husband’s favorite dishes and he gives it two thumbs up.
In Goa, Vindaloo is eaten with pao (pronounced ‘pow’), which means ‘bread’ in Portuguese.  They take the bread (usually a European-style crusty dinner roll), tear off a piece and dip it in the Vindaloo.
I like to eat it with Instant Pot Rice because if it’s too spicy, the rice tones down the heat for me! But my husband never eats it with rice, only pao!

Click Below to Check out all my Indian Recipes! 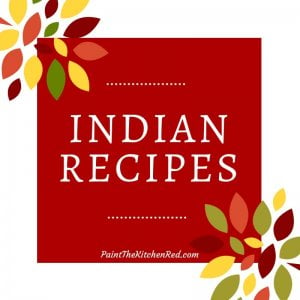 This Instant Pot Vindaloo recipe requires some patience, mainly with frying the onions. The onions are blended and sauteed and this gives the dish a creamy consistency.  If you wish to skip the blending, you can finely chop the onions and saute them.  In that case, your curry might be less thick, but will be just as tasty.

Initially when you saute the blended onions, they’ll release a lot of liquid and steam.  You might even shed a tear or two!  In the first stage you can stir the onions occasionally.  Once all the liquid has evaporated (about 8 to 10 minutes), keep a close eye on the onions because they can burn very quickly.

As soon as you start seeing them brown on the bottom of the inner pot, be sure to deglaze with water, one tablespoon at a time.  Keep stirring and add water if needed, a little at a time, until the onions are cooked, begin to caramelize, and are fragrant.

The country style boneless pork ribs work perfectly for this dish.  If you’re substituting another cut, try not to use a lean meat; it’s best to have some fat/marbling for Instant Pot recipes.  Before you add the marinated pork to the Instant Pot, make sure there’s nothing stuck to the bottom of the inner pot.  If there is, deglaze before adding the meat.

If you can marinate the pork the night before, you’ll have that much more flavor.  As with most Indian curries, this Instant Pot Vindaloo tastes even better the day after you cook it.

Kashmiri chilies are available in Indian grocery stores and they are known for being milder than regular chili peppers, but have a deep red color.  Kashmiri Chilies are at 1000 to 2000 on the Scoville Heat Index, somewhere between a Poblano and Pasilla chili pepper.

By way of comparison, the Jalapeno pepper is between 2500 and 8000 Scoville units.  You can substitute another red chili pepper, but you might have to decrease the quantity and add some good quality paprika for color.

If you’re using paprika, make sure it hasn’t been sitting around in your cupboard for ages – try and get a fresh container.  If you’re interested in seeing the comparison between different types of chili peppers, PepperScale has some very thorough information.

You can add a tablespoon or two of brandy instead of Feni.  I would remove a serving of pressure cooked vindaloo, and stir in a half to full teaspoon of brandy, and see if you like the taste, then add more (to taste) to the remaining Instant Pot Vindaloo, and heat through.

If you’re new to the Instant Pot 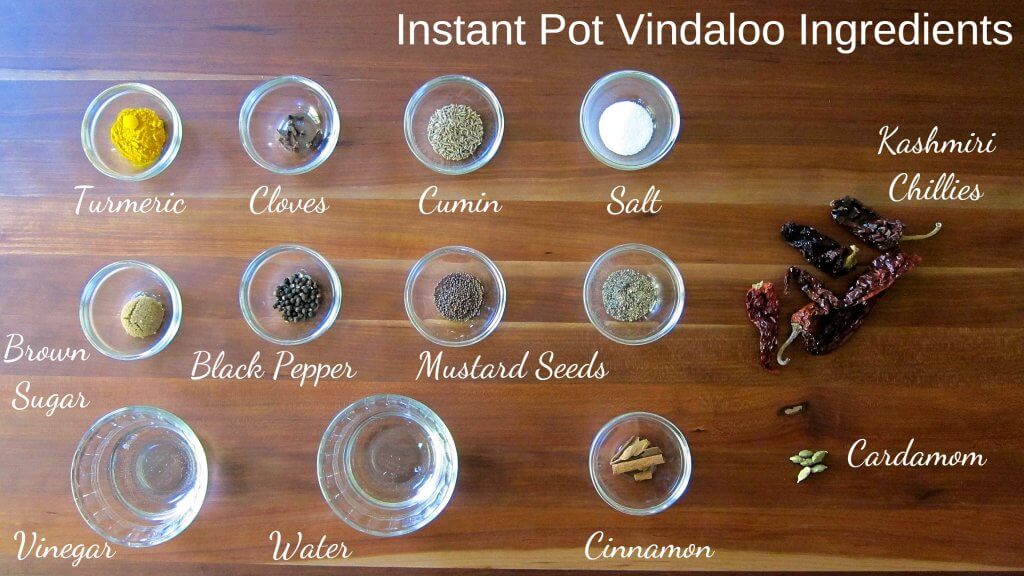 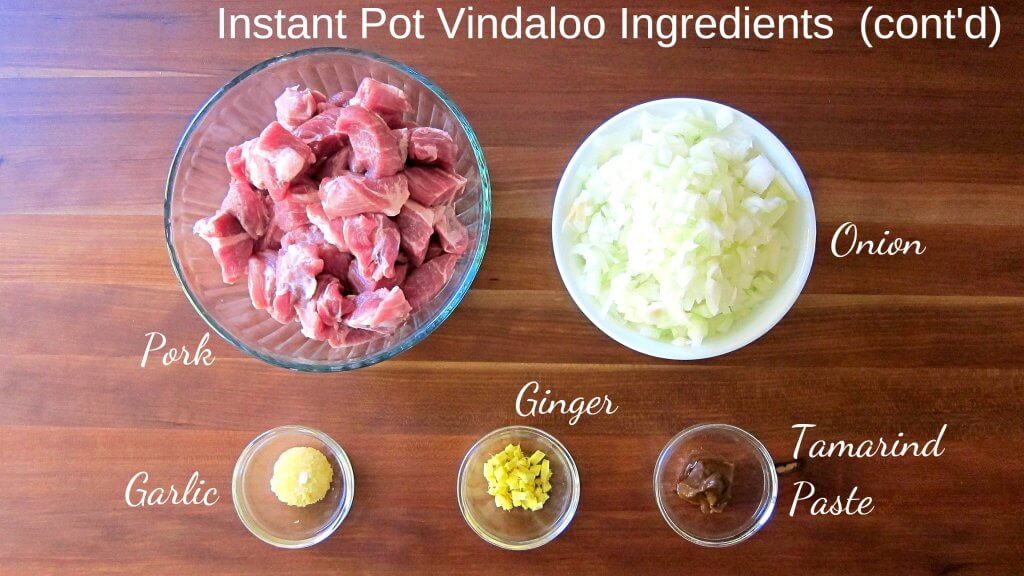 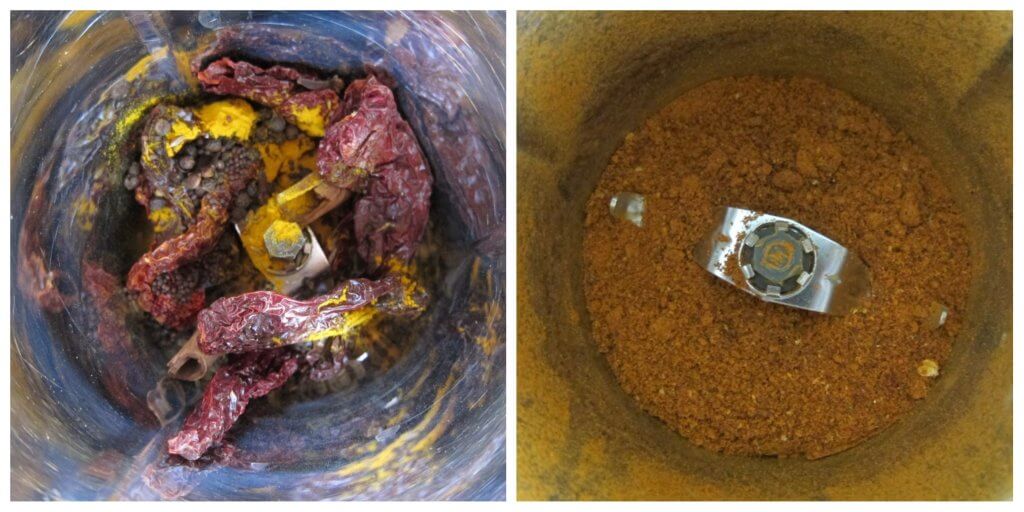 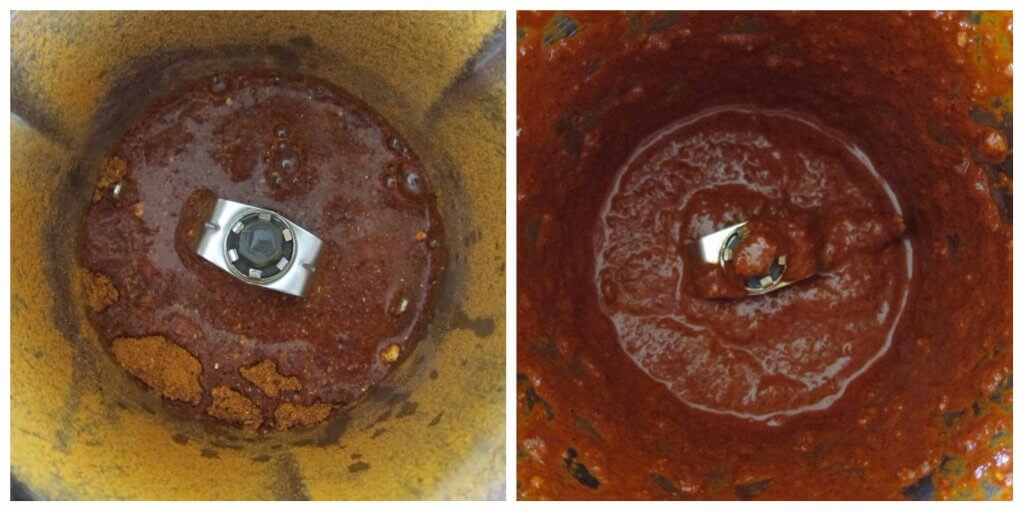 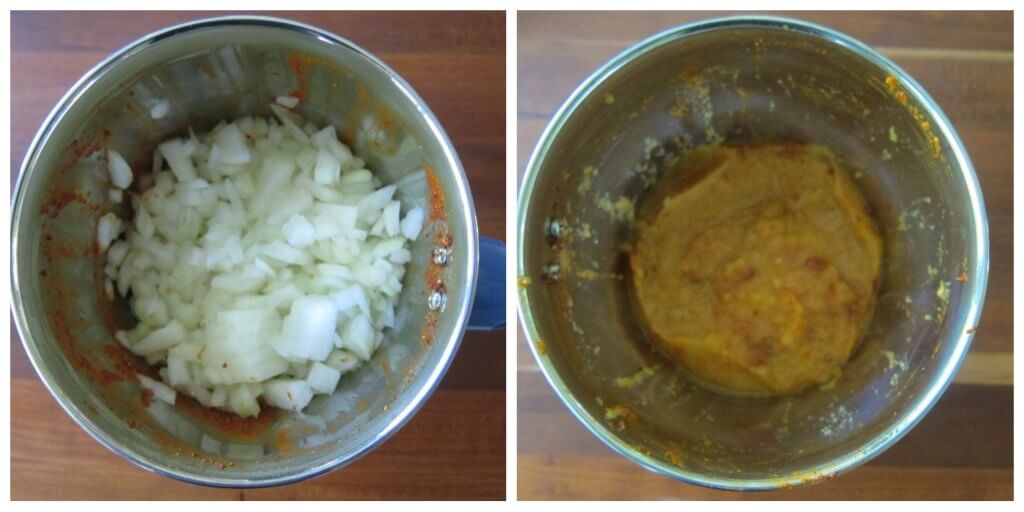 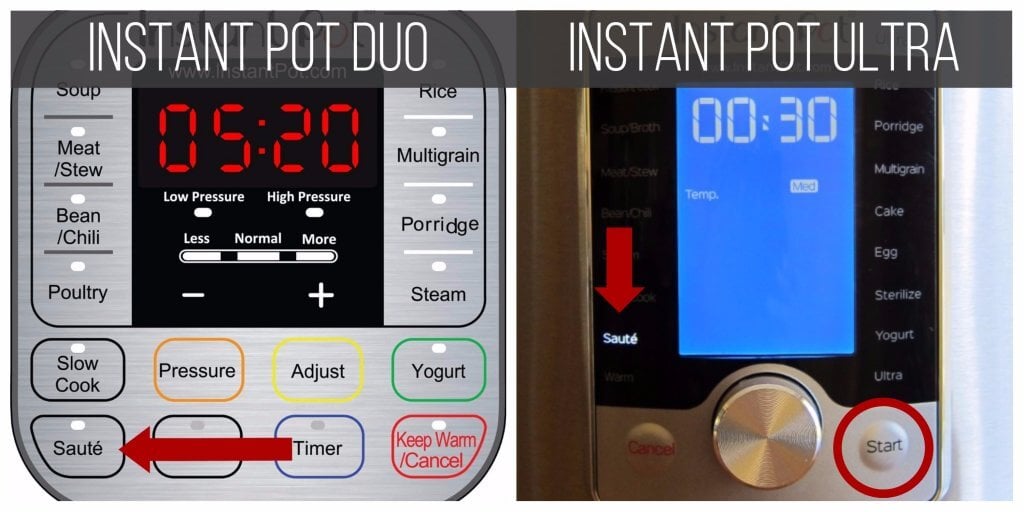 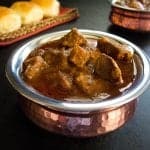 Instant Pot Vindaloo is a spicy, tangy Indian curry from the state of Goa in India. This is an authentic Goan Indian family recipe that comes from my mother-in-law and was adapted for the Instant Pot.
4.6 from 5 votes
PRINT PIN RATE
Prep Time: 15 minutes
Cook Time: 45 minutes
Total Time: 1 hour
Servings: 6 servings
Calories: 374
Author: Paint the Kitchen Red

Note: If you have an adblocker, you won't be able to view the video.

If you loved this recipe, please give it a 5 Star rating in the comment section below and please share it on social media using the social media share buttons at the top and bottom of this post. Thank you so much!